When the 1966-67 school year began on September 6, 1966, Reston area students were housed at Oak Grove Elementary School, a former all-black elementary school that had closed in 1965 when Fairfax County Public Schools (FCPS) racially integrated. In December, as construction of the new Reston Elementary School neared completion, the Fairfax County School Board officially named the building Lake Anne Elementary School. Lake Anne opened its doors for the first time on January 17, 1967 to approximately 300 students. The school's staff and volunteers had spent the previous weekend preparing the school, portions of which were still under construction.

In the spring of 1967, planning began for the dedication of Lake Anne. Senator Harry Byrd was chosen as the guest speaker by the School Board, but many in Reston considered this a poor choice because Senator Byrd strongly opposed racial integration of the public schools. Reston, from its inception, was a racially and economically diverse community—a welcoming community to people from all walks of life.

Principal Beatrice Ward is glad her student body includes both whites and Negroes, affluent and indigent, and she hopes as the community grows it will always have a wide range of backgrounds and abilities in its school.

In May 1967, Lake Anne held its first book fair and the second PTA Board was elected. The first school year ended with 315 students enrolled in our school. During the summer break, in mid-July, Lady Bird Johnson, the First Lady of the United States, visited Lake Anne and met with the Head Start children.

On September 5, 1967, 543 students and 19 teachers arrived for the start of Lake Anne Elementary School’s second year. This was an important year for our school, because it was the year our school staff became racially integrated. A special staff retreat was held at teacher Mary Jane Scurlock’s parents’ country home, so that the staff could get to know one another and build strong working relationships. In November, FCPS administrators began an extended evaluation of Lake Anne, studying the effectiveness of team teaching and the efficacy of adaptable and flexible classrooms. The results of this study would shape classroom design and teaching methodology in FCPS well into the 1970s, and had a direct impact on the design of the second Reston elementary school, Hunters Woods.

In February 1968, parents were informed that due to anticipated overcrowding, Lake Anne's sixth graders would be housed at Herndon Intermediate School during the 1968-69 school year. Several factors contributed to this decision: the introduction of kindergarten in 1968-69, the rapid growth of the Reston community, and the lack of funding necessary to build new schools.

On September 3, 1968, the first kindergarteners walked through the doors of Lake Anne. At the same time, our sixth graders lined up to board school buses bound for Herndon. At Herndon Intermediate, they were joined by sixth graders from Herndon Elementary, who had also been displaced due to overcrowding. A short time later, it became necessary to bus fifth graders from Lake Anne to Herndon as well. Herndon Elementary School's assistant principal, Margie W. Thompson, was put in charge of all the elementary-aged children housed at Herndon Intermediate. One year later, Thompson would become the principal of Lake Anne Elementary School.

Keeping Up With Growth

The sending of fifth and sixth graders to Herndon was the subject of a meeting held in October 1968 with William Hoofnagle, Reston's School Board representative, and Victor Lindquist, the FCPS Area III Administrator. Parents were upset over the arrangement, and they were told that it was becoming increasingly difficult to keep up with Reston's growth. At the meeting, Principal Ward stated that Lake Anne had a 29-1 pupil-teacher ratio, and that enrollment at Lake Anne had grown to 719 pupils. By February 1969, enrollment swelled to 780 pupils, which far exceeded the school’s capacity at that time, and three teachers had to be added to the staff.

In early April 1969, Principal Ward announced that she was leaving at the end of the school year. Her commute of 22 miles one way was getting to be too much, and she was given the opportunity to open a new school near Annandale, Camelot Elementary School.

Margaret W. "Margie" Thompson succeeded Ward as principal of Lake Anne Elementary School in 1969, and went on to lead our school for seven years.

In August 1969, it was announced that children from the Charter Oak, Golf Course Island, Forest Edge, and Hunters Woods communities would attend the new Hunters Woods Elementary School in September. Lake Anne started the 1969-70 school year with 579 students, and Hunters Woods with 612 students.

The people who designed Lake Anne Elementary School, did so with a new teaching methodology in mind—team teaching. In the beginning, primary-grade level teams were called P-I, P-II, and P-III, and older children were grouped in grades 4-6. In 1970, the team designations changed to letters (R, E, S, T, O, and N). In 1974, the team names were changed to types of sailing vessels (Sloops, Yawls, Runabouts, Skipjacks, Clippers, and Catamarans) in keeping with our school's nautical name. Students and staff picked the new team names, and the youngest children were called Team Mini-Fish.

The Clippers were the "family team" for several years. At one time, there were children in grades 2-6 on this team. Since students spent many years on the same team, it was indeed a family affair. The teachers and parents came to know one another very well, and the students benefitted from the strong home-school connection.

In January 1972, Bosley Crowther, representing a joint-council of the Lake Anne, Forest Edge, and Hunters Woods PTAs, told the School Board that a particular area of concern for the Reston community was the lack of special education programs for students with learning disabilities. At least 178 children with special needs had been identified in Reston, and the council advocated that facilities and personnel be made available in schools to shape and adapt programs for these children and not to segregate them in special and isolated facilities as was being done. A Learning Disabilities (LD) center opened at Lake Anne the following school year, and the students were educated in small groups which also functioned as a part of the larger teams.

Lake Anne's principals have always encouraged community participation in our school, and our community ties have always been strong as a result. One well-remembered community event was the Artists and Craftsmen Workshop held in the fall of 1973. Every day for four weeks, potters, weavers, sculptors, and visual artists gave special lessons to Lake Anne students. Many of the extra-curricular and co-curricular clubs and activities that our students participate in today began in one form or another during our earliest years.

During the 1970s, Lake Anne held annual talent shows, choral and band performances, and had a school newspaper. After school, students could learn a foreign language and participate in activities like the math club and drama club.

In January 1976, Margie Thompson was appointed principal of the new Terraset Elementary School, set to open during the 1976-77 school year. She was succeeded by George P. Coussoulos, who led Lake Anne for ten years from 1976 to 1986.

During Coussoulos' time as principal, he instituted an activity period during the school day. Activities included carpentry, science, visual arts, a prose and poetry workshop, and television production.

Our first mascot, Plesio, joined Lake Anne in 1977. Green and white were adopted as the school colors, and the sailboat became our symbol. 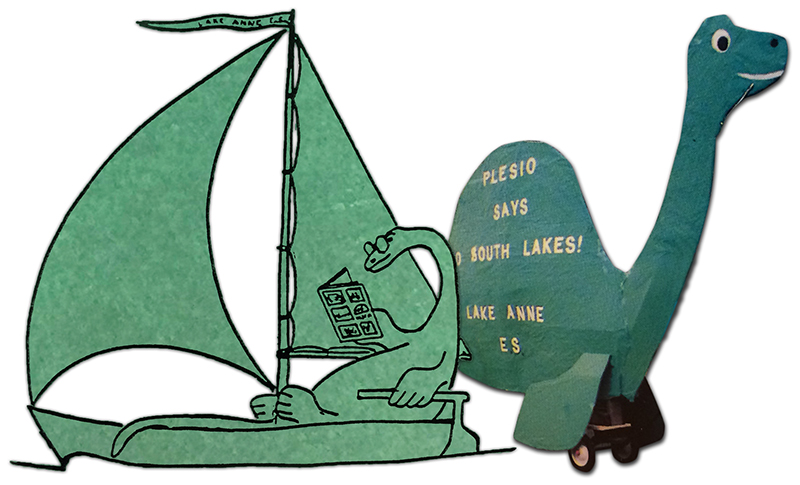 The First Renovation and Addition

During the late 1970s, overcrowding once again became a major concern at Lake Anne. Our enrollment in 1978 reached 684 students, and portable classroom trailers were brought in to serve as temporary classroom spaces.

In 1981, a School Bond referendum was held, and voter-approved funding in the amount of $1.58 million was allocated for improvements to our school. In January 1982, the architectural firm of Peck, Peck, and Associates, Inc., was assigned to the Lake Anne addition and renewal project.

The preceding history was adapted from a history of Lake Anne School written in 1983 by Linda A. Singer, our librarian at that time.